Rehabilitation of a Brunel designed masonry railway bridge, strengthened for the freight loads of today

This Brunel designed 3.75m span masonry railway bridge near Reading on the Berks and Hants line was exhibiting excessive deflection (up to 10mm) as heavy goods trains passed over. It was also assessed as being understrength by about 50% for freight loading.

The fundamental problem with the Brunel design is that the arch barrel is three centred and thus has a corresponding greater lateral thrust at the springings compared to a semi-circular barrel. The fact that the railway line is on a high embankment and the abutment walls only have tall slender buttresses has meant that there is limited lateral resistance. We suspect Brunel designed it this way ‘just because he could’ though he could never have anticipated that it would have to carry today’s large heavy aggregate wagons.

The team’s solution was to inject grout, using our proprietary ReFORCE System, into the area of the haunchings to improve the lateral strength of the fill and then strengthen the barrel using the MARS System. The ReFORCE System ensures large volumes of grout can be placed with precision and even distribution without migration of resin away from the target area, so mitigating any risk of leakage upwards into the track bed. The MARS system of masonry reinforcement was then installed over a three week period.

Continuous monitoring showed that the grout injection alone reduced the resultant movement at the crown by over 50% and monitoring of the completed installation gave a peak value of 1.25mm which is equivalent to a very acceptable span/3000.

The works did not interfere with the rail traffic. To ensure the safety of the technicians, temporary props were installed under the barrel during the installation though these were isolated from the soffit by 25mm rubber pads.

As the MARS System utilises the inherent strength of the arch barrel, it thus minimises the use of environmentally damaging materials. The integrity of the System can be easily inspected at routine inspections though there are no future maintenance costs associated with the System.

Completing the project under Covid-19 conditions

The excellent cooperation between Network Rail, Arcadis, Amco-Giffen and Goldhawk resulted in a unique project, running to programme and budget without any disruption to rail traffic or even need for track possessions during installation. Covid-19 working rules were strictly adhered to with our technicians wearing filtered power operated visored helmets for close working.

The only feasible alternative would have involved shutting the lines and a major reconstruction or replacement of Brunel’s bridge. This alternative would have had an incalculable carbon equivalent footprint, it would have caused major disruptions to the rail network and destroyed the legacy of arguably the most prominent engineer of all time.

This is a significant ‘first’ for the MARS Strengthening System in that we have now had the privilege of prolonging the life of a Brunel designed bridge and preserving it for the nation. 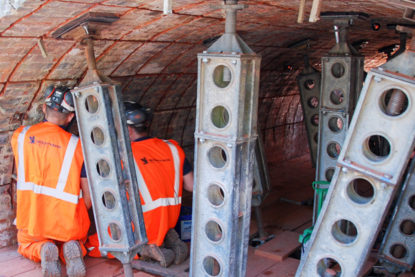 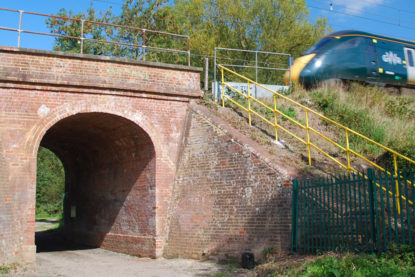 Continuous monitoring of the freight after installation of the MARS system