This picturesque bridge in the London Borough of Enfield was inspected by Goldhawk in order to assess the damage caused by a water main burst in November 2016. Remedial work hasn’t yet commenced on the bridge. However, the following case study gives Goldhawk’s recommendations.

The carried road over the bridge has been reduced to a single carriageway controlled by traffic lights. This was a result of a lorry accident in 1968 which demolished the east parapet over the bridge span. This parapet has since been rebuilt.

Interstitial grout injection is advised for the arch barrel and the flood relief tunnels to replace the mortar and fill lost by the flow from the burst water main. The more severe cracks should be stabilised using Helifix stainless steel Helibars and repointing should be carried out using lime mortar in the areas identified by Goldhawk.

Small diameter Helibars should also be inserted through the face of the barrel and anchored beyond the circumferential cracks that run under the spandrel/parapet walls. These will retain the flexibility between the barrel and the spandrel but prevent further outward movement.

The ReFORCE piling system is recommended under the flood relief tunnels to give support from below the water percolation level and thus prevent movement under flood conditions. These are installed, using a lance, through small apertures (40mm) drilled through the base of the tunnels. The resultant piles are typically 500mm in diameter once cured and up to 5m deep depending on ground strata. This system would enable the tunnels to be supported below the level of water flow but still allow percolation during flood conditions. The ReFORCE piling system is installed exclusively by StressUK which is a sister company of Goldhawk Bridge Restoration Ltd. 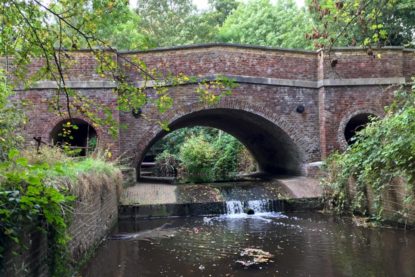 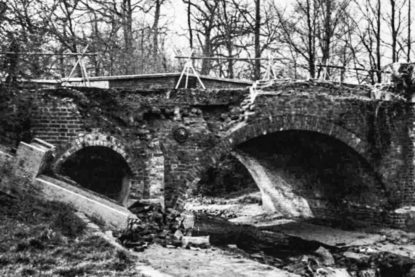 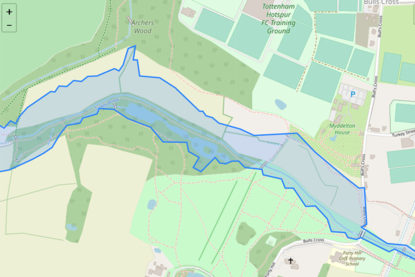 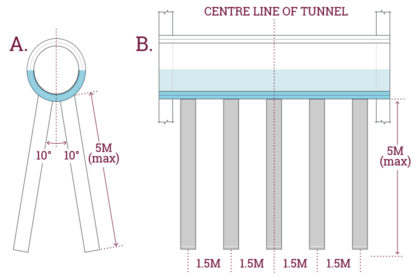 A) Cross-section. B) Longitudinal section