This contract illustrated clearly one of the very real advantages of Goldhawk’s MARS System. The first photo below shows two Grade II listed adjacent masonry bridges over the canal in the centre of Birmingham. The bridge in the background was strengthened in 1972/73 using a gunite concrete liner. As can be seen from the photo, this entailed narrowing the canal, rebuilding both towpaths and adding an obstruction to pedestrians.

The MARS System installed in the foreground bridge involved none of this and was a fraction of the cost of a gunite liner. The foreground arch was strengthened using the MARS System to enable it to carry the new tram system which extends across Birmingham and into other adjacent towns.

The client was Midland Metro Alliance but the work, closely monitored by Pell Frischmann, had to satisfy Birmingham City Council and the Canal and Rivers Trust.

The 200-year-old elliptical arch barrel is an unusual shape, as shown by our analytical model below and also the photos of the exploratory trench excavated above the extrados of the barrel. It is worth noting that our design software, MARSYS, can cope with any shape of arch barrel and any number of piers. Previous assessments of the bridge had concluded that it was understrength and was not able to carry the required highway loading. Goldhawk thus had to design the MARS System to bring the bridge up to full strength, with SV100 vehicle capacity, and also to carry the proposed tram system.

We didn’t use our normal Helibars on this bridge but instead used high strength 8mm Betinox stainless steel ribbed bars from Ancon Ltd. The barrel is of bonded construction so ring separation is not a problem. However, 6mm radial pins were still used to anchor the System to the barrel.

The bridge comprises a single span brick arch with a clear span of 8.545m and a width of 13.8m. The main circumferential bars were inserted at 190mm centres.

Goldhawk had a window of 11 weeks to carry out the works. This included additional work in the removal and reinstatement of a significant concrete chamfer at the junction with the adjacent united barrel. The work was completed one week early to the complete satisfaction of all interested parties. 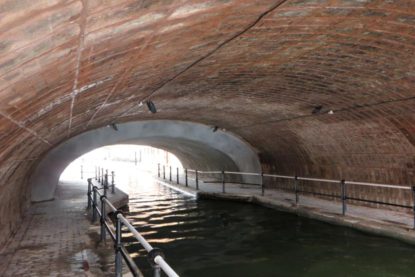 Clear advantage of the MARS System

This model took into account the stepped profile of the arch barrel. 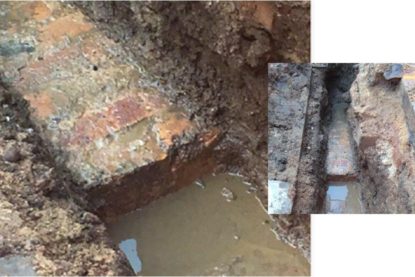 Seen from the top of the extrados.

Circumferential detail of the MARS System 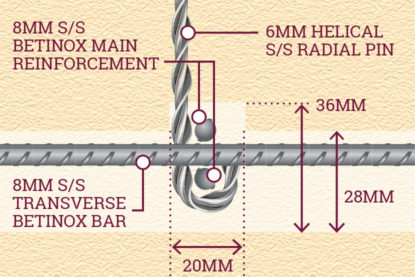 Transverse detail of the MARS System 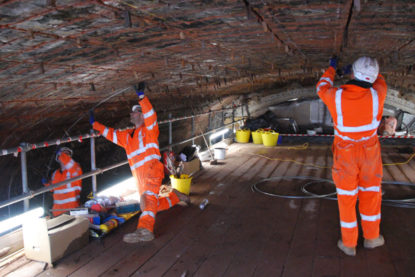 Installation of the MARS System 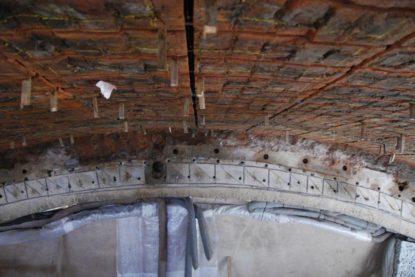 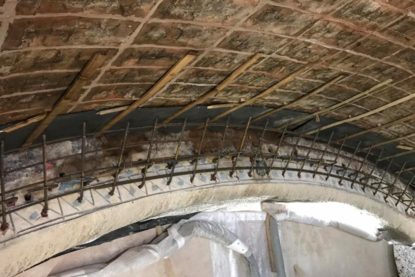